A few weeks ago at my bachelorette party in the woods, eight of my friends donned my yoga pants for an afternoon hike. As we set out with beer and snacks in tow a friend exclaimed, “Look Diana!” As my eyes, and those of seven other ladies followed her finger, we starred upon the rear end of my bent over friend, whose white polka dot panties were making an appearance in the glorious sunshine. 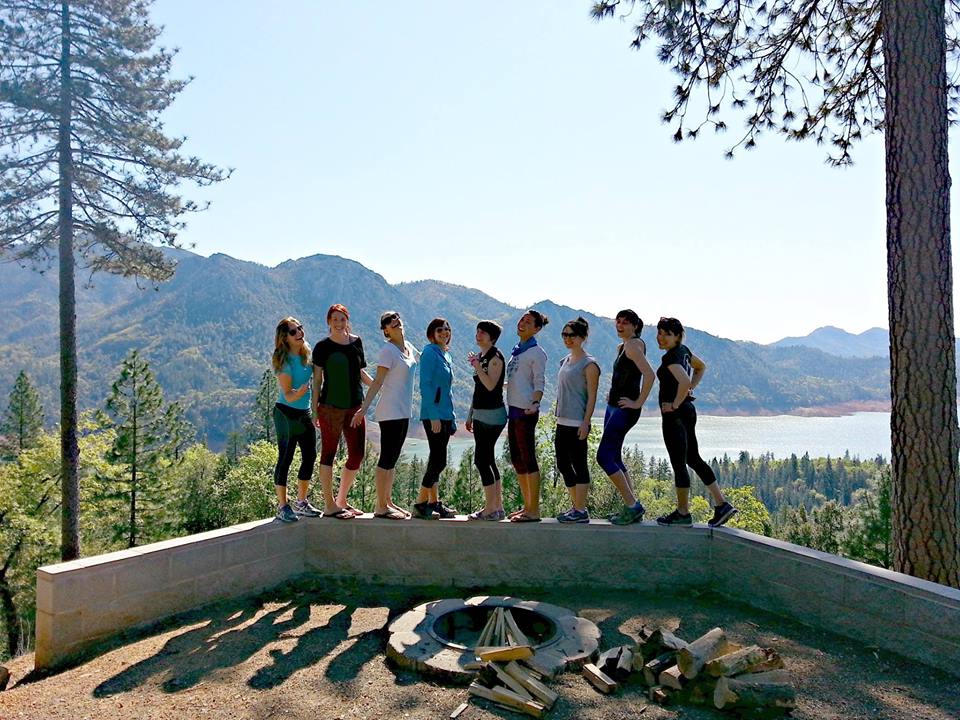 Having invested three years and tens of thousands of dollars in my activewear line, DDCC (www.ddccsf.com), I almost had a panic attack, but to avoid ruining the weekend I did the next best thing: I cried. I cried and cried and then, when I was finally done, I sucked it up and did what any CEO would do in my same situation: I took pictures of my butt. 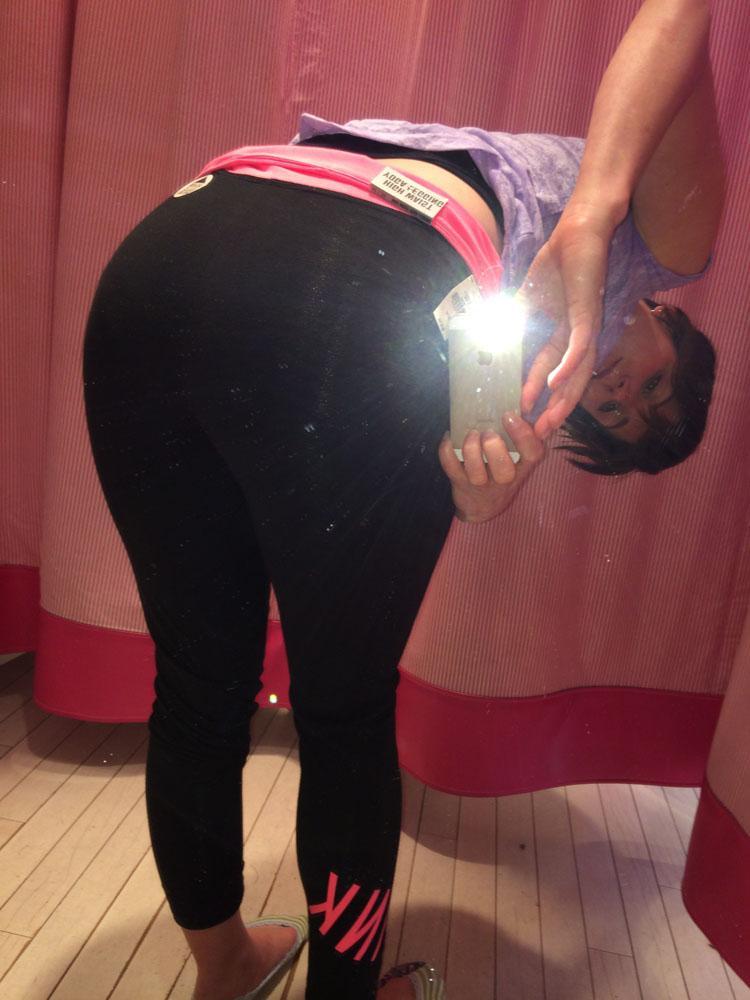 This is a totally normal way to spend your Saturday.

Now, my general understanding of knit fabric is that when it stretches it becomes sheerer, because the yarns spread out creating space in between. That’s just science. But with companies promising everything in their activewear I decided to give them the benefit of the doubt and set out to test pants from four of the biggest names in the scene.

First stop was Victoria’s Secret. I’ve been hearing good things about their activewear, and I’m always down to scope out a competitor. I like that they offer cotton yoga leggings – cotton is my favorite material for wearing round my nethers as it allows the lady downstairs the freedom to breathe. Unfortunately, I’m phasing it out since most women want miracle technical fabrics. I tried on a small and a medium in their yoga pant to see if the size made a difference, but it was minimal. When bent over my white stripes shown through like a beacon in the night. 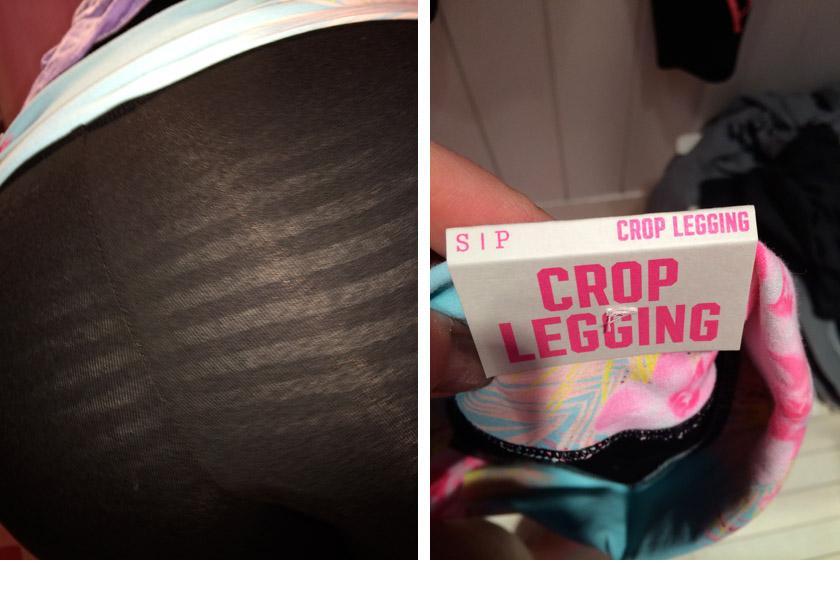 Think again if you think your pants are sheer because you’re squeezing into too small a size. I tried on the Small and Medium and the results were the same.

Next up was Nike. Let me just say, I LOVE Nike marketing. You’re not going to find clothes in the Nike store with BS names like, ‘The Nourish Tank,” or the “Believe Capri.” They’re straightforward and to the point. I had to restrain myself from trying on everything I saw and settled on a compression running capri and a slimming yoga pant. The compression pant was a thinner, dri-fit fabric, and the Yoga pant was a lot thicker. Both, however, failed the test of remaining opaque when bent over. 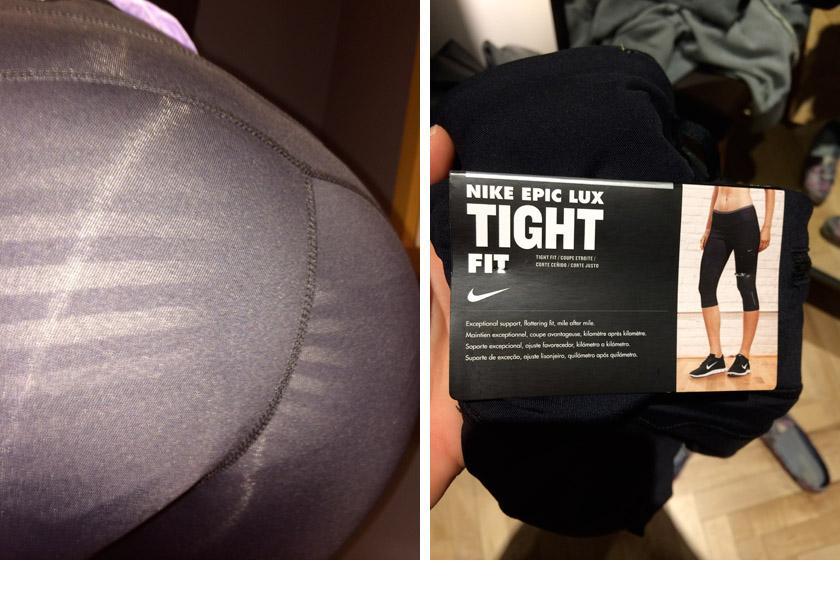 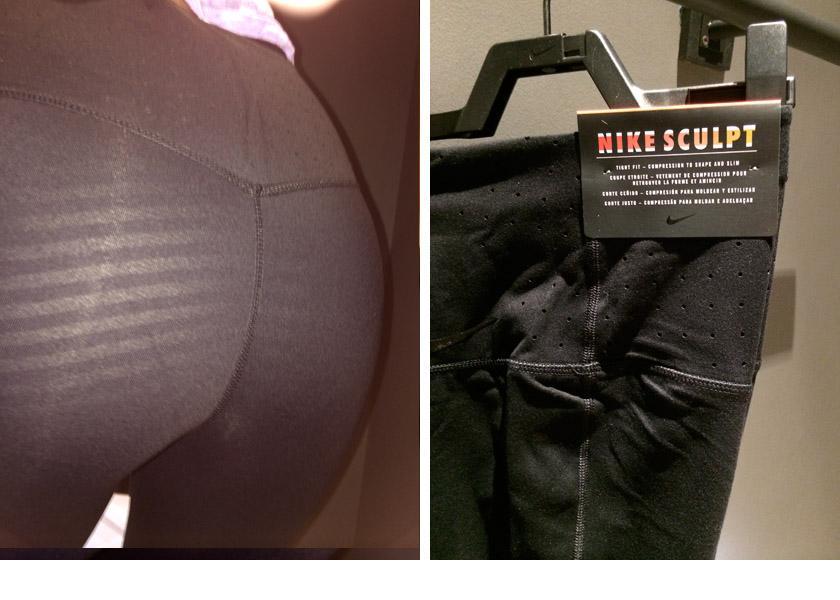 The Nike Sculpt: I couldn’t fit one leg into the small. Try these on if you want a corset in the form of a yoga pant.

The third stop was Lululemon. I have to commend them on their salesmanship, as the minute you walk in the door some squeaky girl is in your face pulling items off of the shelf for you to try on. I was recommended a thinner running crop and Wunder Unders, which the sales lady said would be thicker. Like the two other stores in the dim light they looked fine, but again, when bent over like an actress starring in Butt Masters 9, neither blocked out the formidable stripes on my underoos. 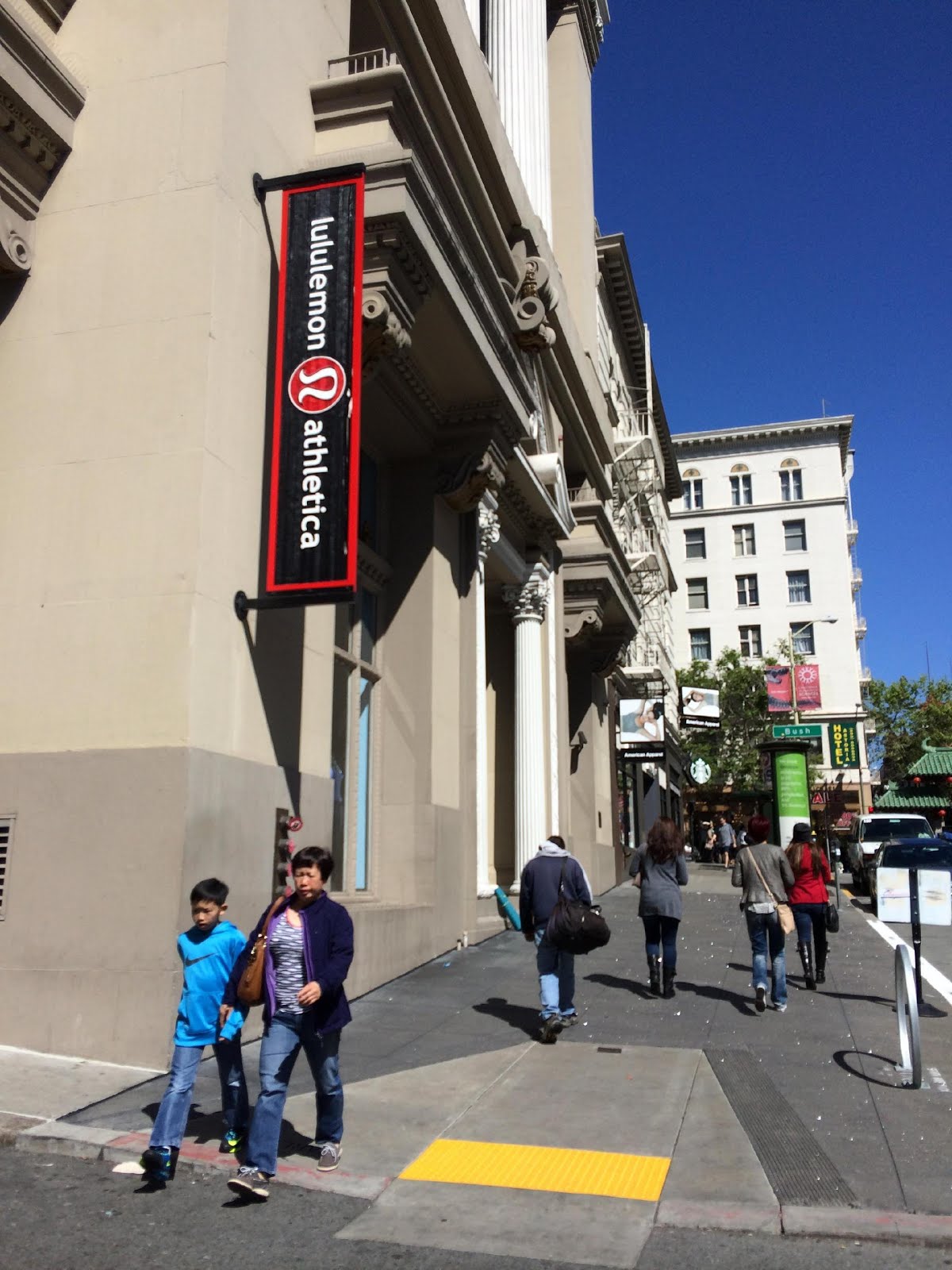 I’ve often thought I should start a support group for activewear companies who are tired of being referred to in the context of Lululemon. Lorna Jane & Nancy Rose, call me! 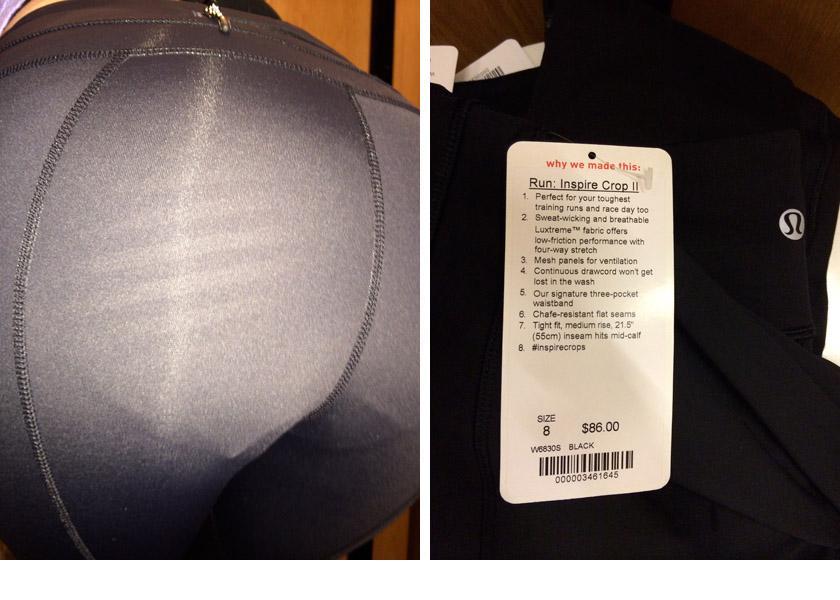 I was so inspired when I took this photo. 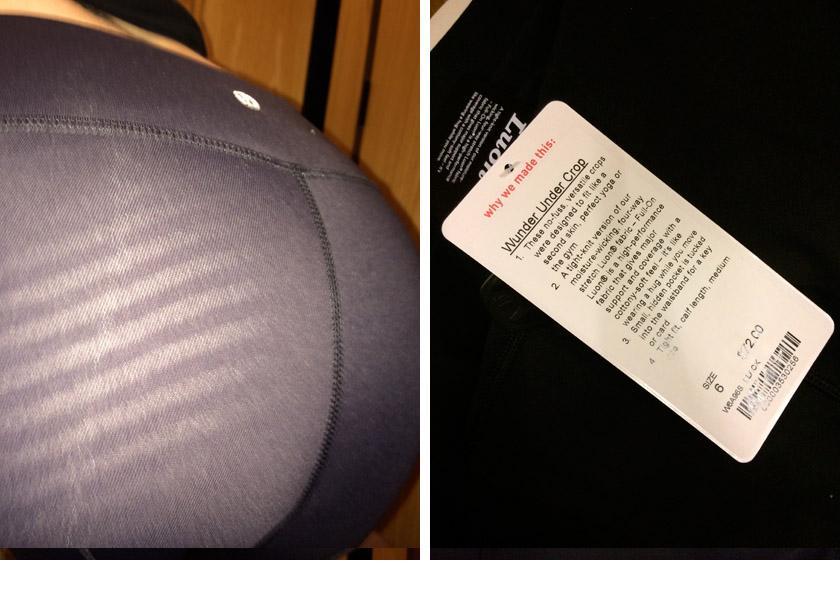 You don’t have to wunder what’s under these pants.

The last stop was Zella, Nordstrom’s active brand. A fashion blogger had once told me their fabric was amazing, so I had to check them out. I tried on two pairs of Ultimate Stretch Live In Crops in a small and medium, and squatted with my cheeks spread. While the fabric felt much thicker than the Wunder Unders and Nike/VS, it still failed the test. These stripes clearly weren’t going to run. 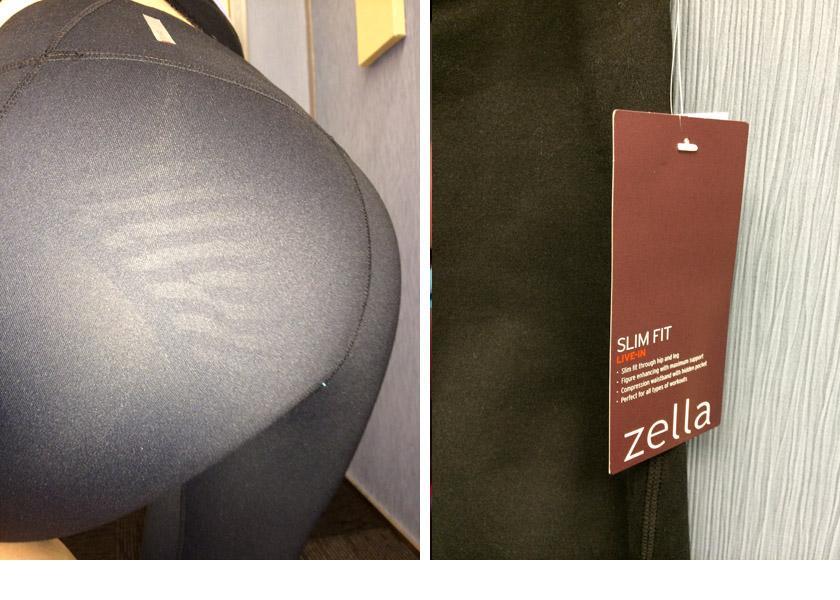 Yes, you can live in nylon yoga pants, but your gynecologist probably doesn’t recommend it.

If we want a solid color yoga pant that won’t show what’s underneath there are a few options. The first is to get a looser style that that won’t stretch when we’re bending over. The second is to go commando, although I wouldn’t recommend it if you’re headed in for an intimate sports massage or if you have shiny jewelry down there. And the last, which should be obvious by now, is to wear underwear that matches our pants! If we wouldn’t expect a white pant to block out patterned underwear, then don’t expect a product that is designed to stretch to the max to do it either! In the words of my mom, who told me she owned white panties just for wearing under white pants, “Different underwear are for different things, and women should know that.” Thanks, mom.

I could recommend any of these products based on their quality, but I suggest choosing your activewear based on the things that matter to you, like the fit, the fabric, the marketing message, and the companies’ ethics.  So please ladies, keep this in mind when shopping for activewear, and stop stressing about your pants being sheer!

Diana Mitchell lives in San Francisco, CA where she enjoys running, practicing yoga, eating ice cream, and going out with friends. A former teacher, she left her day job to start DDCC, a line of women’s active and lifestyle apparel designed and made in San Francisco. An acronym for Dirty Diana’s Clean Clothes, Diana is a firm believer that if you live life right, you get a little dirty in the process.

Next post: Must-Watch Russell Brand Video is Big Slap of Consciousness and Love