by YD
in Business of Yoga, YogOpinions
tags: YogaGlo

Just as good riddance was being given to 2013, YogaGlo, a prominent online yoga video service, was awarded a patent on a set of criteria for producing yoga video.  In a statement released just before the holidays, Yogaglo defended its position and offered examples of alternative methods that are not in violation of the patent.  A consideration of their suggestions and the precedents being set raises serious questions about the future of yoga on the internet.

Most people in the yoga world have heard about the YogaGlo issue.  Richard Karpel, the CEO of Yoga Alliance, led the charge petitioning against the patent quite publicly and forcefully.  Even after the cause was ostensibly dashed by the final decision of the patent office, Mr. Karpel sharply questioned the patent’s enforceability.  But despite the attempt to rally the yoga community and block what many see as an impingement upon the free market of yoga, there has not been much uproar outside of the inner yoga blogosphere.  No one seems to know what the patent really does or means and, consequently, most folks don’t see it affecting them or care much.

I have no direct experience with YogaGlo.  I do have close friends who are featured and know many people who have made use of the service.  Facebook comment threads are long with both detractors and supporters of YogaGlo and their newly gained patent.  But even among supporters, there is a general lack of perspective on the business aspect of online yoga transactions.

When most people purchase online a streamed yoga video of a particular teacher, they think of the money they are spending as a show of support to that teacher.

What most people don’t realize is that the revenue that comes from a streaming service does not really go to the teacher (see this diagram from an anti-YogaGlo website.)  As misguided as it may be, teachers willingly give up their content to Internet portals because it is thought to give them “exposure” to a broader audience beyond their own local sphere.  And while the content they give away may indeed be viewed by more people, whether or not that amounts to any actual financial support is another question entirely (see Yoga in a Digital Age.)

Short shrifting content providers aside, YogaGlo realizes that many people think that the steps they have taken are un-yogic.  In their official response, they sought to paint their move as only a small matter of claiming what is rightfully theirs and provided thumbnail images of different yoga videos to say:  “See.  We are not trying to stop you from making yoga video.  Just make yours like these (and we won’t have to send you intimidating letters or take you to court.)” 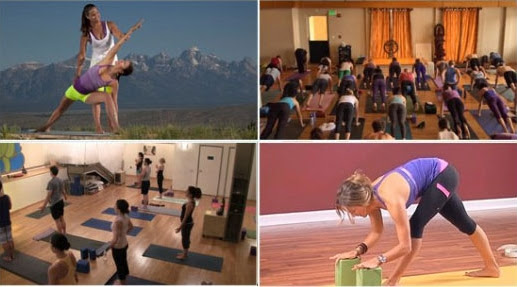 But the YogaGlo examples of compliant yoga video are more what you might call “cut-away” shots.  If you only have one camera and you want to set it up somewhere and take one continuous reel of a teacher teaching a class then it would not make sense to have the camera up high or at a severe angle.  A straight shot of the teacher and students would be a standard base line.  The finer details of spacial relationship and configuration of the teacher and students that YogaGlo claims to have invented, and hopes to prevent others from utilizing, are ambiguous at best.

The obscured and most alarming aspect of the YogaGlo claim is that we are not talking about a yoga teacher copyrighting a sequence of asanas as intellectual property, we are talking about the legal ownership of a camera angle.  And not just any camera angle.  But the one camera angle that best allows for a lower budget, single camera shoot.

This is only obvious to me because it just so happens that I recently produced a yoga video and got to experience the process from both ends (see J. Brown’s Yoga Video.)  Given limited resources and production options,  if we had decided to include students (which is in the works for our next project) then we could easily have ended up in violation of the patent.

The most common reaction on the yoga street is agnostic.  It’s hard to believe that you could make it illegal for someone to set up a camera and film themselves teaching a yoga class with some students on each side and a space between them to see the teacher.   No one thinks that YogaGlo is really going to take someone to court every time they post a YouTube video that crosses an imaginable line.  But on some level, they don’t have to.  Receiving an intimidating letter, or even just the threat, and the power to remove content from public platforms are likely enough to muscle out a little more market share.  In a most cynical business sense, the game is already won.

But without content, online yoga video portals die.  And I don’t care what anyone says, the future of yoga is not streaming online video.  The future of yoga is its integration into the everyday lives of people and culture.  Perhaps online yoga video has a supplemental role to play, but the internet’s capacity for transmitting yoga will be determined more by the input of actual yoga teachers than the inclinations of those who man the funnels.

J. Brown is a yoga teacher, writer and founder of Abhyasa Yoga Center in Brooklyn, NY.  His writing has been featured in Yoga Therapy Today, the International Journal of Yoga Therapy, and across the yoga blogosphere.  Visit his website at jbrownyoga.com